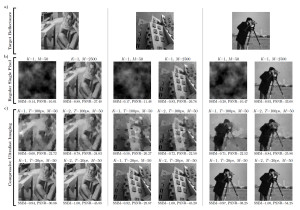 Today’s conventional cameras require a set of highly precise lenses and a large array of individual light sensors. This general blueprint limits the application of cameras for new uses, e.g. in ever-thinner smartphones, or in spectra outside the visible light range.
To overcome these limitations and completely rethink the basics of imaging, researchers from Rice University, Heriot Watt University and the University of Glasgow (among others) have recently developed a “compressive sensing” concept camera which uses only a single pixel and no lens whatsoever to record pictures using computational imaging. The trick here lies in the light source, which illuminates the scene using a series of defined black-and-white patterns (coded mask). Based on changes in the resulting light intensity across many exposures, the single pixel camera can then infer the position of objects and patterns in the scene.
Until recently such single-pixel systems required a large number of exposures in the range of 2000 or more. Now, Guy Satat and colleagues from MIT‘s Camera Culture lab have combined single-pixel camera with another cutting-edge technology, ultrafast femto- or picosecond light sensors. Looking not only at the intensity changes across masked illumination bursts, but also within individual bursts, the researchers are able to break up the signal into light reflected from different distances in the scene. This brings the number of required exposures down from 2500 to just 50 in the example outlined in the paper and video. Moving from a single pixel to several light-sensing pixels, placed in a defined sensor pattern, this number can be further reduced without losses in image qualilty.

The advances in this special field of computational imaging are very exciting and may one day lead to credit-card-thick cameras. In the shorter term, compressive sensing is expected to considerably reduce the cost of expensive out-of-visible-band sensors, and improve microscopy and scientific imaging, where illumination can be highly controlled.