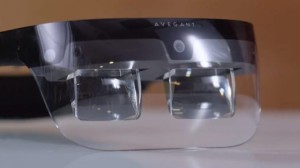 Virtual Reality and Augmented Reality (or Mixed Reality) headsets have evolved quite a bit over the last few years. Improvements in resolution, lag, and other factors, have led to new, extremely immersive systems such as the HTC Vive. Hovewer, one missing feature is still holding back the technology:
Generally speaking, most of today’s displays consist of a two-dimensional display that’s placed at a fixed distance from the user’s eyes. This creates a conflict for our eyes and brain, which in the real world are used to a linked adjustment of the angle between the eyes (“vergence”) and the focus plain (“accommodation”). Recent proof-of-concept systems use up to three display planes, allowing us to experience discrete near, mid-range and far layer to focus on, but for a better, more immersive 3D experience we’ll need the ability to experience at almost continuous focal range.
The most promising solution to this problem is light field technology: For instance, Nvidia’s light field display prototype has shown successfully (though at low resolution) that it is possible to construct a light field image that allows placement of multiple objects at different focal planes or virtual distances. The Nvidia prototype uses a microlens array, much like in light field cameras from Lytro or Raytrix. Magic Leap is another company working on light field technology. While the company has teased a head-mounted light field display on several occasions, they have yet to explain how exactly their system works, let alone present a working prototype to the public.

In the video above, the company presents a functioning prototype of this new light field display and shows the form factor of the head-set they envision. Unfortunately this is as much information as the company is presently sharing.