Rony Abovitz, CEO of the secretive startup Magic Leap, was expected to reveal the company’s rumoured Augmented Reality headset recently at a TED talk in Vancouver, but canceled a few days before. Instead, the company released a 90 second promo video teasing an AR game that it says is “currently being played at the office”, and it looks pretty awesome.

Video description: Unfortunately, we couldn’t make it to TED, but we wanted to share one of the things that we’d planned to share at the talk. This is a game we’re playing around the office right now (no robots were harmed in the making of this video).

The “Weta Workshop” video first shows how the user pins a youtube app to the air, next to his laptop, for later use, and opens his gmail inbox. All input seems to be from hand gestures.
Then, he picks “Games” from what seems to be the main menu, and opens “Dr. Gordborts Victory, Ray Gun Rampage”, and gets to choose his weapon from a nearby desk. This is where the video reveals that we’re not only seeing virtual reality objects: Look closely, and you’ll notice real shadows of the ray gun on the user’s hand. The game itself blends the real environment, opening hatches in the ceiling, and showing a real wall busted down by a virtual tank in the end. Also, the fact that some of the robots are partly occluded by a wall makes us suspicious of whether we see the actual real-time footage of the user. Still, even if it will take a few years until such a product will be released, the demonstration is altogether pretty impressive. 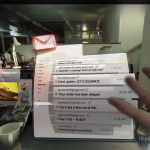 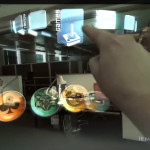 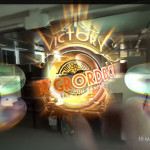 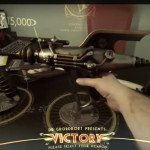 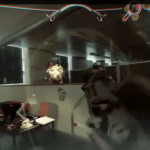 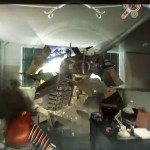 What we do know so far is that Magic Leap works with Dynamic Digitized Lightfield Signal technology, which consists of “new sensors, processors, software, and at least one headset”, according to TechNewsWorld. The company has secured more than 500 million dollars in funding in 2014.