Over at habr.com, there’s a new, in-depth article about light field video entitled “Computed video at 755 megapixels: plenoptic yesterday, today and tomorrow”. While the article is written in Russian, Google Translate is doing a decent job in translating the ~5600 word essay into English language.

Author Dmitriy Vatolin (3Dvideo) details in rich detail the capabilities of Lytro’s 2016 Lytro Cinema camera and the fundamental basics behind it. He then goes on to look at what becomes possible with light field technology, with a special interest in video and film making, and finishes by describing how/when the technology could move over to smartphones. 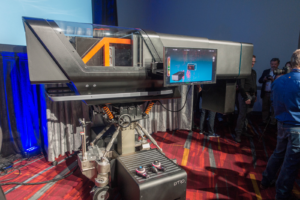 The article is a worhtwile read, and also includes a fascinating 25 minute video interview/demonstration with Jon Karafin, then Head of Light Field Video at Lytro, published by No Film School:

Of course, Lytro closed business in early 2018, but the technology is there and has been shown to work, so it’s only a matter of time before somebody else picks up where Lytro left off.