We’ve taken a brief look at the definition and principle of light field photography in What is the Light Field. On this page, we’d like to show the possibilities that come with light field imaging.

One of the most prominently marketed features of light field photography is the possibility to change the focus after the picture is taken. Knowledge of the direction of light rays in a recording allows us to reconstruct different versions of a photo with infinitely adjustable focus:

The information contained in a 4D light field volume includes a 3D model of the captured scene, as well as the direction of all light rays arriving at the sensor. Using this rich information, we can use complex mathematics to change optical parameters which, in conventional photography, would be fixed when the image is recorded. One of these parameters is aperture, which determines the depth of field. This makes it possible to produce images with very shallow depth of field (e.g. a very blurry background), or infinite depth of field (where everything is in focus), from the same recording.
“Extended depth of field”, “all in focus” or “total focus” are commonly marketed terms describing the “sharper image” side of the synthetic aperture feature, but shallow depth of field and more bokeh are also possible, and may especially be desired for artistic effects.

By selecting specific light rays that travel through different parts of the main lens system, we can produce different views or perspectives of the recorded scene. The resulting parallax effect – showing differences between two different lines of sight – is similar to moving your head around slightly to peek behind an object.
The strength of this parallax effect is dependent largely on the diameter of the main lens system. In case of the Lytro LightField Camera, you can shift about 5 cm from the very left to the very right.
Other terms used for parallax are “multiview” (e.g. with Raytrix products) or “perspective shift” (e.g. with Lytro products).

Since light field technology is based on tracing light rays, it correctly reproduces the effects of optical elements (e.g. lenses or reflecting surfaces) in an image:

Utilizing different views from parallax (see above), we can reconstruct 3D images with a single exposure from a single lens. In contrast to conventional two-lens 3D recording, the baseline is not fixed at recording. Instead it’s possible to rotate a picture and still produce a correct 3D effect, without having to tilt your head in the same direction.
3D stereo is included in the standard software packages by Raytrix, and in Lytro Desktop 3.1 and higher. 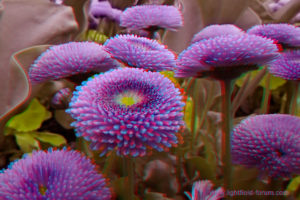 If the optical properties of the light field system are known precisely, it is possible to translate the relative depth data into absolute distance from the lens. This can be useful in many use cases, from inspecting manufactured parts for quality assurance, to measuring the dimensions of microscopic samples.
“3D depth estimation” is available for Raytrix cameras as a software add-on. 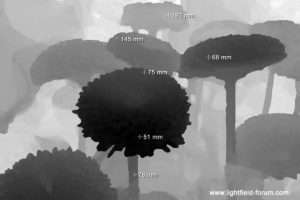 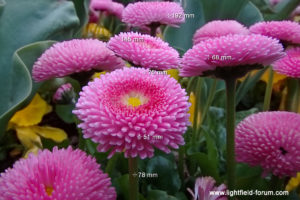 LightField pictures can be stretched or compressed in depth. Similar to the “dolly zoom” video effect (or “vertigo zoom”) that is created when zooming in on a subject while moving in the opposite direction, objects in the background seem to move closer to the subject. When zooming out while moving closer, objects in the background seem to move farther away.
Depth scaling has already been demonstrated by both Lytro and Raytrix. Raytrix’ Android App (sadly, no longer available) allowed users to experience the feature first-hand.

Using the depth data that can be derived from a light field volume, it is also possible to change the lighting of a scene after the picture was taken. Digitally moving the light source in post-processing produces realistic, new shadows in a captured, real scene.

All of the features above apply to both, still light field imaging as well as light field video. Processing large lightfield datasets requires lots of computing power and very high-end hardware, and processing in real time remains a technological challenge.
However, Raytrix has already demonstrated live 3D light field video at up to 25 frames per second: