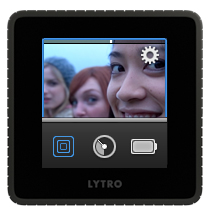 With their newest camera firmware (v1.1.2), Lytro has implemented a number of interesting changes to their first-generation LightField camera.

Most notably, Creative Mode has been revamped and is now used completely differently:
In all previous official firmware versions, the refocus position was set by tapping on an object in the middle of the desired range. Refocus range was then largely influenced by the current zoom position.

Now, Creative Mode was simplified, in that users just tap on what’s most important in the scene, and the camera “takes the current zoom position, focus position, and relative distances into account” when establishing the refocus range automatically. (More details at the end of this article.)

Another new detail, which many users have asked for, is the addition of a numerical zoom indicator, i.e. your current zoom factor.
Speaking of zoom: the zoom range in Everyday Mode was extended from 3x to 5.5x. The full zoom range of 8x is still only available in Creative Mode.

Lytro’s Knowledgebase has more details about how Creative Mode was changed:

Previously (firmware 1.1.1 build 150 and earlier), tapping the screen while in Creative Mode set the middle of the refocusable range. What this meant in practice was that to achieve best results, you then needed to move the camera forwards or backwards to adjust for objects in the scene, and finally take the picture.

In contrast, the improvements in firmware 1.1.2 will now make the camera more intuitive about focus and relative distances while shooting in Creative Mode. You’ll simply tap the object in your composition that’s most important, and that’s what will be in focus. The current zoom position, focus position, and relative distances are all taken into account under this new approach.

What do you think about the new Creative Mode?