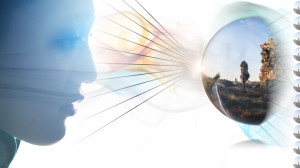 According to CEO Karafin, the new displays are based on “nanoparticle technology” to generate light fields which create a more real-world feel than conventional flat displays.
A prototype display is reportedly already in fabrication. The company plans to have engineering samples ready in 2018 and development kits in 2019. Further down the road, the generated holograms will even be touchable: “We have the ability to take these rays of light and feel them,” said Karafin during a recent interview with Variety, where he was referring to another field of cutting-edge technology called volumetric haptics, which uses acoustic waves to simulate the sensation of touch. Altogether, it sounds like Light Field Lab may take us one or two steps closer to the Holodeck.

A peek at their Frequently Asked Questions section reveals a few interesting-sounding details:

3. How can holographic content be viewed without the aid of eyewear?
There are many holographic variations that aspire to display virtual objects without the use of a head-mounted device or stereoscopic glasses. In general, this is achieved through emitting light from each photosite (pixel) such that the viewer only sees it when certain conditions, such as ray angle or wavelength, are met. This can be achieved with lasers, optics, or other emerging beam-steering methodologies.

4. Will multiple people in the same room experience light field content in the same way if they’re looking at the same display?
Yes and no. A true light field display as we are designing provides an experience, just like watching a play in a theater, where everyone sees the same narrative, but views it from his or her own place in the audience. Our passion is for immersive displays that provide a group social experience, instead of one where the whole audience sees a single identical view, but is blocked off from each other by headsets or other devices. That being said, the light field can be creatively changed so that everyone sees the same thing, or completely different things! The options are endless.

5. What is the first technology that Light Field Lab plans to bring to market?
Light Field Lab will first focus on perfecting our holographic display. In parallel, our holographic ecosystem will be refined in order to ensure the quality and proliferation of the light field experience. More details on timelines will be announced in the future.