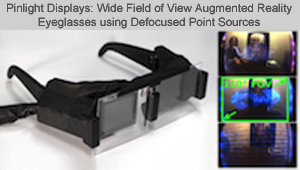 Earlier this year at Augmented World Expo, Nvidia researcher Douglas Lanman gave a talk about Near-Eye Light Field displays, i.e. electronic glasses which allow users to experience both 3D and depth. When asked about Augmented Reality (AR) applications during the discussion, Lanman noted that creating a set of transparent glasses that would also include microlenses (or something equivalent) but still allow “normal” see-through vision, was a real challenge. He very briefly teased “pinlight displays”, which were to be presented at the same conference, but no further information could be found online.

In the Emerging Technologies section of the Siggraph 2014 conference (10-14 August 2014), Adam Maimone and colleagues from the University of North Carolina at Chapel Hill and Nvidia will be presenting their new invention in a talk entitled “Pinlight Displays: Wide-Field-of-View Augmented-Reality Eyeglasses Using Defocused Point-Light Sources”. 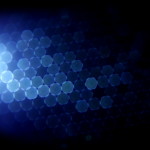 The presentation abstract, available on the Siggraph website, provides some insight into how the team around Andrew Maimone have solved the challenge of a 3D stereo- and depth-enabled Augmented Reality system: Instead of the near-eye light field display‘s LCD and microlenses, the pinlight prototype uses a conventional LCD panel and acrylic sheet that acts as a point-light source, which can then be used to send tiled sub-images to the eyes.

Pinlight Displays: Wide Field of View Augmented-Reality Eyeglasses Using Defocused Point Light Sources
This novel design for an optical see-through augmented-reality display offers a wide field of view and supports a compact form factor approaching ordinary eyeglasses. Instead of conventional optics, the design uses only two simple hardware components: an LCD panel and an array of point-light sources (implemented as an edge-lit, etched acrylic sheet) placed directly in front of the eye, out of focus. The point-light sources are coded through the LCD to form miniature see-through projectors. A virtual aperture encoded on the LCD allows the projectors to be tiled, creating an arbitrarily wide field of view. Software rearranges the target augmented image into tiled sub-images and sends them to the display, where they appear as the correct image when observed out of the viewer’s accommodation range. Evaluation of the design space of tiled point-light emphasized on increasing spatial resolution through the use of eye tracking and demonstrated a preliminary human-viewable display.

The corresponding paper will be published after the conference:

The pinlight display prototype seems to be based on earlier work by main author Andrew Maimone and Henry Fuchs from UNC Chapel Hill, where a transparent multilayer display can be used to both (1) present coded images to the eye and (2) block out light from “behind” the virtual image in the background:

Computational Augmented Reality Eyeglasses
In this paper we discuss the design of an optical see-through head-worn display supporting a wide field of view, selective occlusion, and multiple simultaneous focal depths that can be constructed in a compact eyeglasses-like form factor. Building on recent developments in multilayer desktop 3D displays, our approach requires no reflective, refractive, or diffractive components, but instead relies on a set of optimized patterns to produce a focused image when displayed on a stack of spatial light modulators positioned closer than the eye accommodation distance. We extend existing multilayer display ray constraint and optimization formulations while also purposing the spatial light modulators both as a display and as a selective occlusion mask. We verify the design on an experimental prototype and discuss challenges to building a practical display. 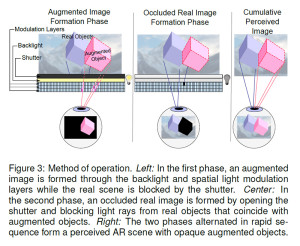 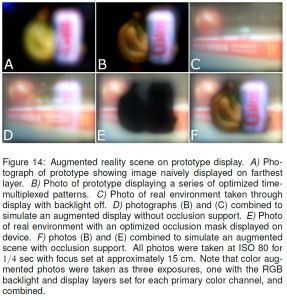