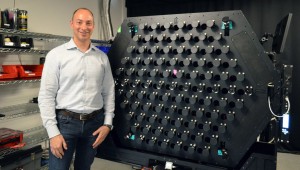 Back in August 2016, Lytro unveiled its first Virtual Reality experience, “Moon” (see below), to show off the capabilities of Immerge, the company’s groundbreaking, high-end production camera that records light fields for virtual reality. While it was reportedly an impressive experience for the VR viewer, it also had its limitations (especially with moving objects in the recorded scene).
Now, Ben Lang from RoadToVR talks about a recent visit to Lytro, where he saw the new and improved Immerge prototype.

According to Lang, the new version is about four times larger than the first generation and captures a much larger volume of space, allowing users to move their head around more freely. The new Immerge features a 95 element planar light-field array with larger individual elements, and records 90 degrees field of view at higher quality than its predecessor.

The move from Moon to this new production is substantial. Not only does the apparent resolution feel higher (leading to sharper ‘textures’), but the depth information is more precise which has largely eliminated the grainy outlines around non-static scene elements. That improved depth data has something of a double-bonus on visual quality, because sharper captures enhance the stereoscopic effect by creating better edge contrast.

Since the new prototype is flat (planar), and no longer spherical like the first version, production now requires the camera to record a scene in 5 overlapping parts separately (i.e. rotating the camera to record one side, then the next). This is apparently easier for the production process – we can imagine it might be hard to hide the crew and rest of the studio when trying to shoot a full 360 degrees at once.