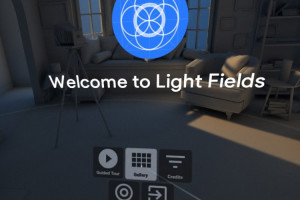 Since the footage is captured using light field photography, you can move and tilt your head around freely and see interesting rooms and other scenes in full 3D, allowing you to also look around objects and see realistic, changing reflections in mirrors etc.

About this Game: Welcome to Light Fields. Experience real-world reflections, depth, and translucence like never before in VR. Explore the Gamble House, Mosaic Tile House, and the Space Shuttle Discovery. These navigable stills showcase the emerging technology Google is using to power its next generation of VR content.

The footage was recorded with Google’s very own 6DoF (six degrees of freedom) Light Field VR camera consisting of 16 GoPro cameras on a rotating platform, presented earlier this year: