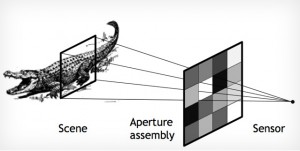 Traditionally, all cameras contain an optical lens and some sort of imaging sensor (analog or digital). With the help of sophisticated computing, these basics may soon be reduced to just a sensor.

According to a new report on Technology Review, Bell Labs (a research organization within Alcatel-Lucent) has developed a new type of camera which makes lenses unnecessary. Instead, the new camera prototype sees the world through a “series of transparent openings” (aperture assembly). The camera compares the individual images coming through each aperture (think “coded mask“), and uses the differences between them to reconstruct the final image.

“The architecture consists of two components, an aperture assembly and a sensor. No lens is used,” say Huang and co. It consists of an LCD panel that acts as an array of apertures that each allow light to pass through and a single sensor capable of detecting light three colours.
Each aperture in the LCD array is individually addressable and so can be open to allow light to pass through or closed.

One advantage of this “Compressive Sensing” technology, one that will probably help it reach the mass market, is its low cost: The current prototype uses just “low cost, commercially available components” such as a 1 megapixel imaging sensor, a semi-transparent LCD panel and a computer.
The camera also needs only a fraction of the data commonly required for an image. Because of the omission of optical lenses, there are no image aberrations, and the entire scene is always in focus.

As the sample images above show, the technology isn’t quite there yet, but it’s a good start, considering the scenes were recorded at only a quarter (books) and one eigth (football) of full resolution.