One of the major aspects of computer vision is object recognition. While humans usually have no problems finding an object in an image or video – despite the multitude of possible viewing angles – this is still relatively hard to do with one or more cameras and a computer.
Especially tough is the task of automatically recognizing of transparent objects, as they are often hard to discern from their background.

This is where light field technology comes in handy: researchers from Kyushu University in Japan have come up with a method for recognizing transparent objects through the amount of refraction and distortion these objects place on the background. Plenoptic cameras (a.k.a. light field cameras) provide the multiple points of view necessary to determine the optical features of the object (collectively termed as the “Light Field Distortion Feature”).

Abstract of the paper: 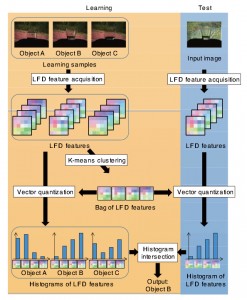 Current object-recognition algorithms use local features, such as scale-invariant feature transform (SIFT) and speeded-up robust features (SURF), for visually learning to recognize objects. These approaches though cannot apply to transparent objects made of glass or plastic, as such objects take on the visual features of background objects, and the appearance of such objects dramatically varies with changes in scene background. Indeed, in transmitting light, transparent objects have the unique characteristic of distorting the background by refraction.
In this paper, we use a single-shot light field image as an input and model the distortion of the light field caused by the refractive property of a transparent object. We propose a new feature, called the
light field distortion (LFD) feature, for identifying a transparent object. The proposal incorporates this LFD feature into the bag-of-features approach for recognizing transparent objects. We evaluated its performance inlaboratory and real settings.