Lytro: No Android App in 2014, “Deep” into New Flagship Product 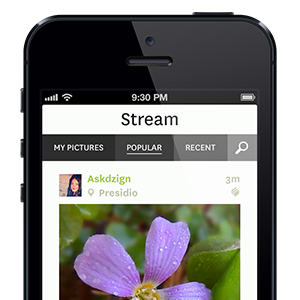 About 10 months ago, Lytro introduced an iOS companion app called “Lytro Mobile” and, at the same time, released a firmware update activating the camera’s internal WiFi chip.
The app makes it possible for iPhone, iPod and iPad users to connect wirelessly to the camera, download and preview Living Pictures, upload them to the “Mobile” album on pictures.lytro.com, and even create nice little GIF-animations demonstrating refocus and Perspective Shift. With newer versions of the app came additional features like Living Filters, AirPlay support and 3D export.
Meanwhile, the Android community has been waiting for the release of an Android app.

Slumbering in the “Feature Requests” section of Lytro’s customer support, there’s a request for an Android app, which has had the official status “Planned” for a while now. Revisiting this discussion, we found some recent responses by Lytro staff, which don’t sound to promising for Android users:
Adam Gould, Support and Community Manager at Lytro, broke the news that “after much internal discussion”, an Android app has been moved down the schedule and won’t be released in 2014. Gould further stated that Lytro is “deep into [Lytro’s] 2014 flagship product” preparations, which may be the silver lining of these news.

If you’d like to show Lytro that you care about an Android app, you can support the feature request by clicking on “xx people like this – Me too!” (Lytro user account required): 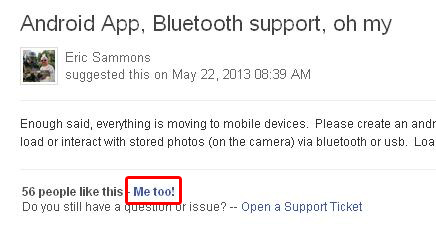 We wanted to thank everyone for weighing in with their passionate requests for Android support. After much internal discussion and looking at what we need to do in 2014, we have made the hard decision that we do not plan on releasing an app for Android this year. Does this mean the Lytro doesn’t think Android is important? Absolutely not, because it is.
This decision comes down to resources and quality: This will be a very big year for Lytro, we’re deep into our 2014 flagship product and we absolutely must prioritize a successful launch and deliver a great user experience. We know everyone won’t agree, but we hope you’ll respect our decision. Android will be a part of Lytro’s offerings, but not in 2014.

Later, in response to some more feedback from Android users, Gould gave some more background information on their decision and what’s currently going on at Lytro:

We are a small company, with limited resources, and part of that is making hard choices on what gets worked on. We are a small startup with an existing software ecosystem of no less than 5 products, with release deadlines and quality standards that must be met for our new flagship product and what’s needed to support it in each of those 5.

As far as 3D is concerned, whether or not any particular individual finds it to be a compelling feature, it continues to showcase feature variety for lightfield photography. Refocusability is one of our most compelling and best known features, but it is not the only feature and it’s crucial we demonstrate there’s far more potential with innovative new features unique to lightfield. It’s almost cliche now to see “Lytro-like” in the press = refocus. We’re about far more than that, and still our “competitors” are little more than gimmicky focus-stacking apps. For the record we eagerly await real competition with an actual lightfield product; we do not want to be the “only game in town”.

[…] Yes, we will absolutely continue to support the existing Lytro camera in future software versions.

I”m so sorry we were not able to keep everyone happy and if we’ve lost any of you along the way. We can only ask that you continue to keep an eye on us moving forward.
February 08, 2014 01:52 PM