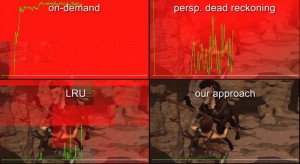 In traditional digital imaging, the projected image is expressed as a set of pixels which contain two coordinates (x, y) and their respective values for colour and brightness. LightField technology enables us to record more and richer image information, also saving the direction of the lightrays. The extra data enables exciting new possibilities, but also accounts for a significant increase in file size and required computing power, which further rises with increasing resolution.

Computer scientists from Johannes Kepler University in Linz, Austria have developed a caching framework that allows the real-time rendering of so-called Gigaray LightFields. The new framework makes it possible to display interactive LightField Panoramas live, e.g. the 360° panoramic LightField that consists of 2.54 Gigarays and 7.6 GB of data, which is shown in the video. The method can also be applied to 3D volume-rendering of large datasets, including high-resolution image stacks from modern scanning microscopes.