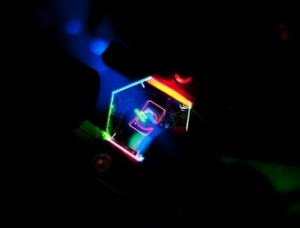 3D displays are slowly moving into mainstream, but most of the technologies used today require the viewers to wear special 3D glasses, or watch from a very defined, small optimum viewpoint. More advanced 3D displays use eye tracking, and create a stereoscopic effect by specifically sending different images to either eye.
David Fattal and colleagues from HP Laboratories in Palo Alto, California developed a new approach to glasses-free 3D displays, which comes with a number of improvements: Their prototype displays use multi-directional diffractive backlight technology, which makes them particularly well-suited for mobile devices (e.g. smartphones, tablets, or watches). They’re high-resolution, very thin (<1 mm), don't require eye tracking, and feature a very wide view zone (up to 180 degrees) at an observation distance of up to a metre. Their work was recently published in Nature.

The researchers explain what makes their invention special:

The key to our design is a guided-wave illumination technique based on light-emitting diodes that produces wide-angle multiview images in colour from a thin planar transparent lightguide. 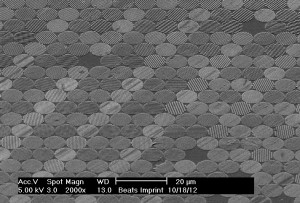 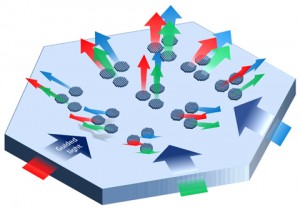 Using special nano structures (so-called diffraction gratings), the team is able to send light from one pixel into different, defined directions. In other words, the display projects different 2D images/perspectives into the viewing zone. Viewers experience a 3D effect because their left and right eyes receive different images. Moving around the display effectively allows users to see the projected scene from different perspectives (continuous motion parallax), similar to the hologram that Princess Leia sees in Star Wars.

If you’re interested in how the technology works, but don’t have the technical background, there’s an interesting interview (text and audio) with David Fattal by The Naked Scientists.