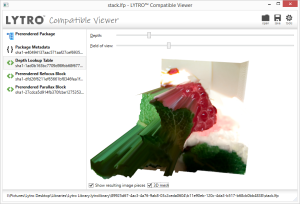 Updates include a 3D mesh view from depth maps for the Viewer, improved demosaicing, and user manuals. The library has received accessors for well-known components in light field packages, dedicated classes and methods for easier access to sub-aperture and individual microlens images.

The web was updated with software versions released with my master thesis. This includes some major updates. For the viewer, it’s the 3D mesh view from depth maps, supporting demodulation if calibration data are available, and I am pretty sure everybody hated the previous zoom & scroll capabilities which were significantly improved. The demosaicing algorithm was changed and couple of bugs fixed. The viewer (as well as the communicator) now comes with an user manual. For the library, accessors were added that simplify access to well-known components in light field packages, so you don’t have to do any metadata parsing yourself. Dedicated classes and respective methods were added to easily access sub-aperture and individual microlens images.
The patent list was updated and links to a set of raw images by Dansereau et al. added. Also the one that shipped with Lytro Desktop 2.0, which is actually a rare one, taken by pre-release Lytro camera. If you are lucky enough to have the Lytro Illum camera, please share an image or two!

Note: Since Lytro changed the file format of pre-rendered pictures (also applies to the first-generation Lytro camera) in Lytro Desktop 4.0, light field pictures processed with the latest Desktop version are incompatible with the Viewer:

Note on Lytro Desktop 4 compatibility: After a picture is re-processed (for adjustments etc.), the viewer stops recognizing pre-rendered packages, although metadata and individual frames can still be viewed and exported. The warp preadjust pictures use OpenEXR image formats and will not be displayed, but can nevertheless be exported.

Although the software was not adapted to include Lytro Illum pictures, some features do work with Illum raw files. To try for yourself, just select “All Files” under “File type” in the “Open” dialog, or right click and choose “Open with…” > “Lytro Compatible Viewer”.