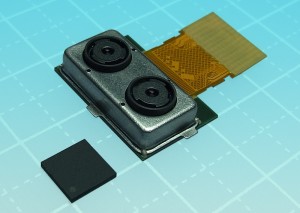 Almost exactly one year ago, Toshiba announced a new light field camera module being developed, which would be small enough for easy inclusion in today’s smartphones, tablets and other mobile devices.

Details on this camera module, “TCM9518MD”, were generally sparse, but over the course of the year, it became clear that Toshiba had steered development towards a dual camera setup with simultaneous image and depth data collection.

According to a recent Business Wire report, the Japanese electronics is preparing shipments of first samples to interested manufacturers, to be sent out by January 31 2014.