Light field displays are the new thing: More and more prototypes and proofs-of-concept have been popping up just in recent months. After recent headlines by Red Hydrogen One smartphone display, the Looking Glass, and Light Field Lab’s Holodeck prototype, we just read about another display prototype that is impressing viewers:
At CES 2019 in Las Vegas, Swiss startup company CREAL3D (“See Real 3D”) demonstrated two proof-of-concept prototypes (one monocular, the other binocular) of their own iteration of a light field display. 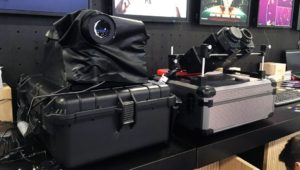 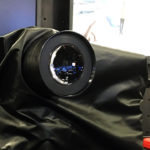 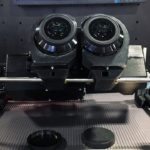 A new article at Road to VR provides a good first-hand account of what it’s like to look through the eye piece, as well as a good description of what makes light field displays better than current VR headsets: CREAL3D’s Light-field Display is the Real Deal – Road to VR

The image quality and real-life depth/blur effects are reportedly very impressive, and successfully fool a digital camera’s autofocus. Below is a raw, through-the-lens recording of the CREAL3D light-field display, in which the camera focuses on different parts of the image (published by Road to VR):

The CREAL3D display reportedly supports “hundreds of depth planes from zero to infinity”, with a logarithmic distribution (higher density of planes closer to the eye). The current prototype version supports only 200 levels per colour (RBG) and has limitations in field of view. However, co-founders Tomas Sluka and Tomáš Kubeš, former scientists at CERN, are planning on shrinking the proof-of-concept down sufficiently to produce glasses-sized Augmented Reality headsets by 2021.

The inventors apparently concealed the devices as much as possible and didn’t elaborate on the technology behind their displays, but stated that they were “using a pojector, modulating the light in some way, and that the image is not a hologram, nor are they using a microlens array”. That last part intrigues us!

The technology still has to be developed from a box-on-a-desk form factor prototype to an actual VR/AR headset you can wear, but the demonstration was reportedly already very impressive, and the company is reportedly in the process of raising a $5 million funding round to grow the company and its development.