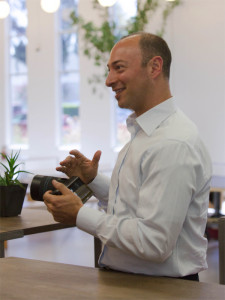 Are you excited about the imminent release of Lytro’s second-generation light field camera, the Lytro Illum? Here’s something to pass some of that time:

Jackie Dove from TheNextWeb sat down with Lytro CEO Jason Rosenthal recently, to talk about the Illum and it’s significance for the future of photography. “Interchangeable lenses”, “DSLRs“, “Photoshop and Lightroom” and “Android” are some of the most important keywords that came up during the interview.

So do you envision the Illum replacing a Canon or Nikon DSLR, or what do you see as the relationship?

Everyone who had the original Lytro already had at least one DSLR or high-end digital camera. The Illum will allow you to take pictures that you could never get, and have online experiences that you could never view with a Canon or Nikon or any traditional camera, and it really enables people to get those shots.

At this point in the evolution of the technology there are still things that traditional cameras are great for and we think that people will keep using them. Over time we believe that in the same way that digital replaced film we feel that light field will replace digital because you’ll be able to get better pictures at a lower cost more easily.