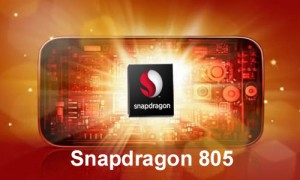 At CES 2014, semiconductor giant Qualcomm gave the media and conference visitors some live demonstrations of the recently announced Snapdragon 805 processor. The company’s new flagship System-on-a-Chip (SoC) is powered by a quad-core Krait 450 CPU (2.5 GHz), an Adreno 420 GPU (500 MHz), and even contains a dual camera image signal processor.
To show what is possible with this higher degree of computational power, Qualcomm showed off some new camera features which may make it into the next generation of mobile devices.

Firstly (since this is primarily a light field site) there’s software refocus. As with other smartphone solutions (apart from the Pelican Array Camera), Qualcomm is using a series of exposures, rather than light field technology, to create the refocus effect.

Chroma Flash is a new, innovative feature in which the camera combines two separate pictures – one with flash, one without – taken in rapid succession. The resulting picture contains the advantages of both exposures: In the example shown, it automatically reduces the highlight reflections in the back and intelligently improves lighting and detail of the tea set.

In the category of real-time effects, Qualcomm demonstrated their “Touch to Track” feature, which makes the camera follow an object of interest with both zoom and focus.

With this second real-time feature, the user can also pick an object of interest, and define an additional “start line” within the camera’s view. The camera automatically starts recording video when the object crosses this line, which may be a handy feature in some situations without your own camera operator.

So there you go – there’s another software-based solution for picture refocus in smartphones and tablets, but there are also some new ideas on how to improve imaging and the user experience using existing camera technology.
What excites us most about the Snapdragon 805, though, is the future range of novel, really innovative features that are only becoming possible with the increased mobile computational power.