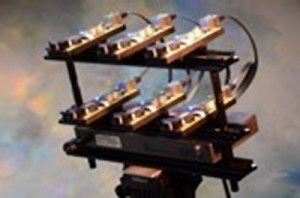 For the past year, the Fraunhofer Digital Cinema Alliance has been researching new, cheaper technology and workflow solutions for 3D film making. In a recent press release, the Fraunhofer Institute for Integrated Circuits (IIS) announced some of the newest innovations from the Spatial-AV project. There’s a new, miniaturized 360-degree ultra-high definition panoramic video camera rig, a prototype microphone management solution for spatial audio recording, and – most interesting to us – a “Light-field Media Production System” that is touted as being “the most innovative lightfield camera recording system to date”.

Let’s have a closer look at Fraunhofer’s setup:

The basic design setup is similar to Pelican’s Array Camera: Instead of an expensive-to-produce single-lens plenoptic camera, the Fraunhofer Camera Array uses a 4 x 4 grid of 16 individual cameras (3 megapixels each). These cameras can be controlled and adapted individually for different purposes, including HDR recording (i.e. recording at different camera sensitivities), recording at higher frame rates (interleaved image capturing) or lightfield imaging. This camera array is powered, controlled and synchronised using a single Ethernet port.
Depending on the task at hand, the array “can be easily re-configured” regarding the number of cameras and alignment.

The Fraunhofer IIS light-field recording system currently consists of a 4×4 camera array with high-resolution HD-cameras. For postproduction the DOPs and producers can are given endless creative freedom to work with the shot material – modify the scenes by changing the camera angle like the Matrix-effect, which shows the actor like frozen in the middle of the scene and the camera moving around the object. In addition, the viewing angle can be shifted or even extended as if the camera was moved although the recording was in fact static. So, parts of the recorded scene which would be masked at a usual straight-on view can be integrated in the scene. The plus of views also allows for a virtual modification of the camera position. The object can be moved back and forth to the spectator without changing the position of the camera array during recoding – this way the cameramen are able to realize the Vertigo or Dolly-zoom effect.

The IIS has also published a “Camera Array teaser video” (MP4, 28 MB). It shows two of their array camera setups connected to a single computer, which then reconstructs an ideal perspective from the two extremes (apparently using depth map information as well as multiview/perspective shift). 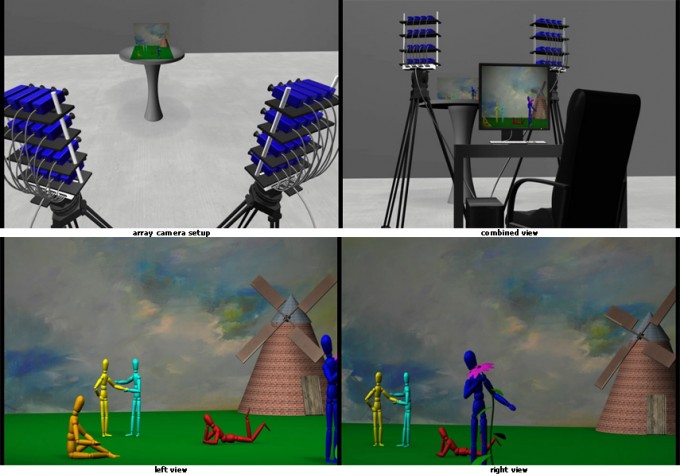 In the future, this [technology] will also lead to the elimination of the need for a green screen in moving picture production. With Fraunhofer’s lightfield technology, professionals can now control artistic effects, such as the Matrix “bullet time” or vertigo effects, in postproduction. The result is a streamlined production process that alleviates costs and provides the utmost creative freedom for producers.