tap2focus: Interactive Refocus for your iPhone 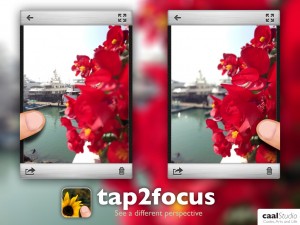 Manufacturers are racing towards creating the first light field enabled smartphone, and the first ones are expected to be released early next year.
If you have an iPhone, you don’t have to wait until then to create pictures with interactive refocus: App developer Caal Studio took the same technological short-cut that MEMS technology uses for image refocus, and merges several images focused at different depths to create a Lytro-like effect.

Their new iOS App tap2focus allows you to take multiple pictures at different focal lengths by tapping on the live camera preview, while holding the iPhone or iPod Touch as stationary as possible.
The app then combines these images into an interactive image, which can be viewed and refocused on the device itself and shared to facebook, twitter or via email.

Samples of shared images are available here and here. Even more in the sample gallery on this page.

From the official description:

How to take a great tap2focus photo?

1. Tap on the Camera button to take photo.
2. While keeping your phone stationary, tap on points in screen to focus and snap photo at that point.
3. (Repeat step 2 as many times as you like)
4. Tap done to save your photo.

Pro Tips: Works best if you can compose your scene first, so that there’s different objects that are different distances from you. i.e. some very near to you and some further away. Start by tapping the nearer object, optimally, this should makes all objects further away blurry. After snapping a photo of this near object, proceed to tap on object that is far away, this should makes near objects blur instead. Snaps as much photo with different focuses as you want. Note that you should always keep your device stationary. Hold your device steadily with one hand, don’t move it, and tap on the objects in the scene with another hand to change the focus.

tap2focus doesn’t give you real LightField technology, and thus has some limitations (especially with movement between pictures). Still, it’s a nice concept you can try for 0.99 USD.