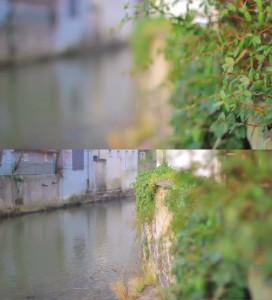 So you like the interactive Refocus feature of Lytro’s LightField Camera, but not its 400+ $ pricetag?
There’s a way to achieve the same effect using an ordinary DSLR or Compact System Camera (interchangeable lens camera), and in this post, we’ll tell you how to do it!

Lytro’s Light Field Sensor and -Engine capture the direction of light by looking at the world through an array of a large number of microscopic lenses just in front of the image sensor. In the case of the Refocus feature, the camera records depth of field information by capturing it over space.
The Chaos Collective come up with another way to achieve the same effect with a standard camera: Simply capturing different focal distances over time, i.e. recording a short video while manually adjusting focus from near to far.

The simple upload and online-processing tool creates an HTML5 object, such as the one above, which can then be embedded on other websites, and shared as links to social networks (Facebook, Twitter, Google+, Pinterest, ..) or via Email.

You can find more background information, more interactive refocus examples and the upload form over here: Create your own DOF-Changeable Image! – The Chaos Collective

Note: Browser compatibility depends largely on the video format used, and the examples seem to be incompatible with Mozilla Firefox at the moment. We successfully viewed and tested them with work with Google Chrome.