Virtual machines: A possible way to run Lytro’s Mac software on a Windows PC [How to] 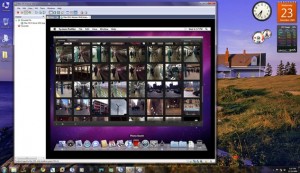 According to several studies, Macs only take up about 9 % of the personal computer market share, the other 91 % more or less go to Windows. This is probably why there is such a lot of frustration among Windows users who are waiting hard for any info regarding the Windows version of Lytro’s Desktop application.
Officially, Lytro for Windows is set to launch “sometime in 2012” – which is not very precise and possibly still a very long time.

There may be a way to run the Mac App on Windows, though: Searching for ways how to do this, i stumbled across an article with instructions on how to install Mac OS X on a Windows PC using VMware. Basically, you set up a virtual machine which can boot Mac OS X within Windows and runs within an ordinary Windows window.

This sounds very promising, but there are a few points to consider:

I haven’t tested this! I’m a Windows user myself, but i’m lucky enough to also have a Mac or two in the family. Can anybody tell me if it works this way, and whether the Lytro app runs o.k.?

Update: Lytro recently responded to a question regarding virtual machines. In short, they say that (1) the probability of corrupted pictures libraries is significant”, (2) Lytro library files from the Mac software may not work for the Windows software, and (3) everything you do is at your own risk. :(