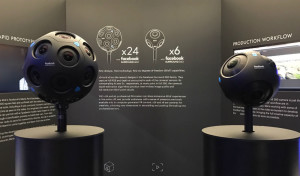 Earlier this year, Facebook and OTOY revealed a new recording technique to combine 360 degree video with depth information. The football-sized sphere contains 24 cameras (there’s also a smaller version with just 6 cameras), allows the recording of 360 degree virtual reality video with 6 degrees of freedom, making it possible for viewers to not only turn their head and look around themselves while locked into the fixed position of the camera, but move around slightly in the scene.

In the presentation, the software uses depth information from stereoscopic 360 degree video – that is, fixed-point VR content with slightly different views for each eye – and extrapolates what the same footage would look like from slightly different positions. Given that this is purely software-based, the results shown below are impressive.

Sidewinder was demoed as one of several software “Sneak Peaks”, so it’s unclear if the software will make it to the market in the forseeable future, but we certainly hope it will!

Check out the videos below for more information: