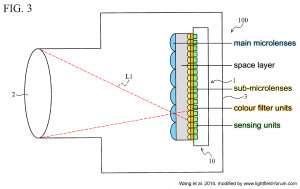 Light field technology is making its way into the mainstream, but the production and assembly of some of its components has not quite reached an efficient scale of mass production.
A typical light field sensor consists of an ordinary image sensor and a microlens array (MLA) or printed mask.
In the assembly of light field sensors, one of the most vital processes is the precise adjustment of the MLA‘s position on the sensor. This adjustment is required for every individual sensor and can thus take up a long time. Since the MLA is usually positioned using screws or springs, physical impact on the light field camera may displace the light field sensor’s layers.

With patent application US 20140183334 A1 “Image sensor for light field device and manufacturing method thereof“, recently discovered by Image Sensors World, Visera Technologies is aiming for an integrated manufacturing method for light field sensors: Authors Wei-Ko Wang and colleagues propose a system where two layers of microlenses (and an intermediate space layer) are formed directly on the image sensor using semiconductor processes.

The proposed method not only allows for precise positioning of microlenses and sub-microlenses on the image sensor, it also produces a single-piece light field sensor with fixed distance and horizontal positioning between all layers that is resistant to physical impact.
The authors discuss two embodiments of the invention, one with a homogeneous array of main microlenses, and one with an array containing microlenses with different focal lengths, as used in the customized, higher-resolution light field sensor invented by Raytrix. 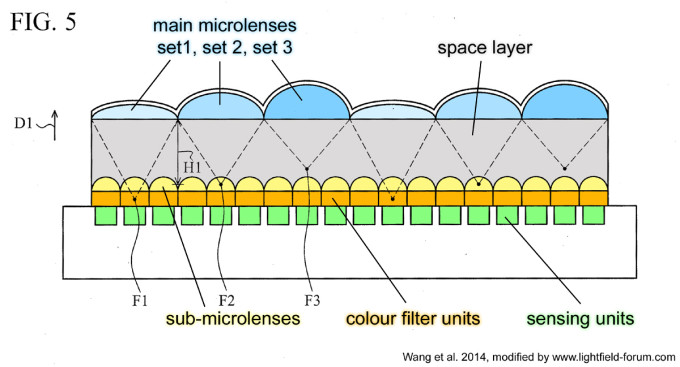