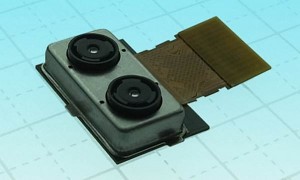 Tech-Giant Toshiba first appeared in the “refocus market” several months ago, when news got out about a tiny light field camera module for smartphones and tablets in development. According to the original report, the prototype was scheduled for mass production “by the end of fiscal 2013”.
Last week, Toshiba officially announced a smartphone camera module with refocus capability, but it’s quite different from the products that were described earlier this year: Instead of a single 1 cm2 camera module with 8-13 megapixel sensor, 500,000 microlenses and effective resolutions of 2 megapixels (6 MP in the second prototype), the new prototype dubbed TCM9518MD consists of two 5 megapixel cameras, a Large Scale Integrated (LSI) chip and no microlenses at all.

In an official press release, Toshiba announced that the dual-camera module will offer software refocus and other features, but not 3D functionality. The module is priced at 5000 Yen (approx. 52 USD, 38 EUR). Working samples will be available in January 2014, and mass production is set for April 2014.

Toshiba’s brand-new camera module collects two 5 MP pictures and uses the accompanying LSI chip to calculate depth data and create an upscaled 13 MP image. Users will be able to refocus after pictures are taken, and also export “all in focus” versions of these pictures. The system promises “super-fast digital focus” and little to no shutter lag. Also, since it doesn’t require any focus motors, the module can be built much thinner (4.65 mm) than today’s 13 MP camera modules.
Features include software refocus, “deep focus“, depth-aware image manipulation (extraction/removal/replacement of objects) and gesture control.

Since the module doesn’t include actual light field technology, it will not be able to provide all light field features, such as perspective shift or 3D. It does, however, sound ideal for Smartphones, Tablets and other devices where size is an important aspect.

What do you think about these camera specs? Would you be interested in buying a smartphone with refocus features? Would it bother you that other light field features are unavailable? Let us know in the comments section!

TOKYO – Toshiba Corporation (TOKYO: 6502) today announced that it has launched the industry’s first[1] dual camera module for smartphones, tablets and mobile devices. “TCM9518MD” incorporates twin 1/4 inch optical format 5-megapixel CMOS camera modules (5 megapixels × 2 arrays) and simultaneously outputs recorded images and depth data. Images captured with the module can subsequently be manipulated to change the depth of field and point of focus. Samples will be available by January 2014, with mass production scheduled for April 2014.

The dedicated companion LSI of the “TCM9518MD” measures and appends depth data to objects in the image. These data can be used for a wide variety of applications, including focus and defocus, and even to extract and erase objects from the picture. Used in combination with customers’ applications, the module supports the creation of new functions.

Summary of the New Product

Key Features of the New Product

The TCM9518MD’s twin cameras and dedicate companion LSI simultaneously deliver deep focus images in which foreground and background and all points in between are in focus, with depth data on each object in the image. This supports creation of new applications for smartphone, tablets and mobile devices, including refocus, defocus and extraction of any objects of the images, and gesture operation.

The companion LSI generates 13-megapixel photographs by upscaling images captured by the twin 5 megapixel cameras. This will contribute to downsizing of mobile devices.

Most of auto focus camera modules for smartphones deploy a mechanical focus structure, moving the lens with motors like VCM[3]. It can take time to focus and also result shutter lag. TCM9518MD offers a non-mechanical digital focus function without mechanical structure, allowing high speed focus by calculating the depth to any objects[4]. It also realizes a lower module height.