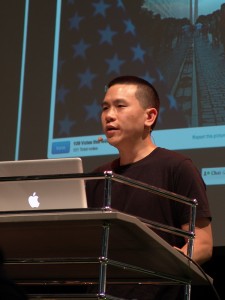 In a Techhive article that focuses (pun intended) on an alternative way of creating interactive click to focus images, we found what may be the first official hint at Lytro’s upcoming products. First off, there aren’t many details – let alone a timeframe – but we’re still a bit excited.

Lytro’s Director of Photography Eric Cheng had this to say during a discussion of some restrictive aspects of their Terms of Service:

Cheng said the company plans to change those terms of use when it adds commercial-grade cameras to Lytro’s lineup, though another consumer-grade camera is planned first.
(…)
And Cheng says its next generation camera will have better quality JPEG output. He did not give a release date.

Many of today’s major players have settled on a one year generation cycle for their products. Lytro is a young company that won’t be able to keep up with such a rapid cycle, and we likely won’t know just when they’ll release their second generation LightField Camera until they decide to make that information public.
However, they’re obviously working on two new models already, and we’re certainly looking forward to see a professional or commercial-grade Lytro camera!