How to disassemble your Lytro Camera (Part 3) 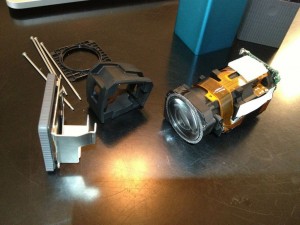 Many of our readers are interested in the internal details of Lytro’s LightField Camera, and our How Tos covering the disassembly of the camera are amongst our most popular articles.

Recently, LightField Forum user ewolfy has provided us with a detailed tutorial on how to separate the optical elements from the display and battery. For easier access, the text and photos are included in below:

Here is what I had to do to take the two half’s apart. 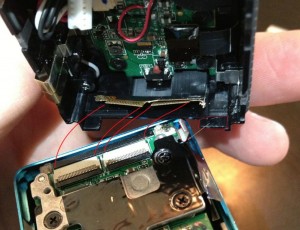 As you can see from this photo, there are 3 obstacles from separating the camera half’s.. There are two tiny ribbon cables and a little plastic tab. Both are easy to remove.
The ribbon cables just require a push from a tiny flat-head screw driver to get the ribbon to slide out from the connector. I had to push a little on the left side (of one) then a bit on the right side (of the same one), sort of inching it out a little at a time.. The I had to do the same with the other ribbon cable too.. Once these are off, the two half’s of the camera bend back even further, but the trick was that bending them back (or pulling them apart by lifting up) still didn’t separate them. The half’s separate by sliding the apart.. Almost if you could imagine two bricks stacked on top of each other and you slide one horizontally off the other. Because the little black tab is under the protruding metal tab.

I don’t believe that this plastic / metal tab does anything other than hold the two half’s together better, there seems to be no electrical connection between the two half’s except via the ribbon cable.

Interesting to note. The camera does not function separated. I thought at least the display would power up because the display and power are both in one side. Also, when I slid the metal housing off the lens assembly, it was tricky to remember which way to rotate this to put it back on the right way. Just make a note of that. 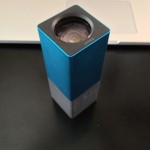 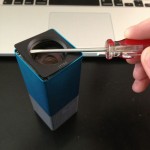 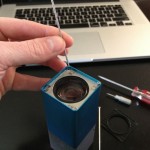 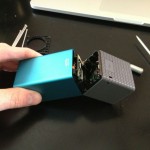 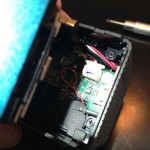 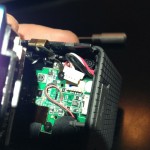 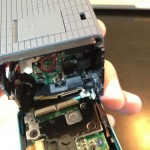 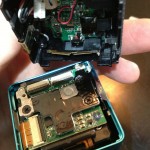 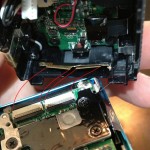 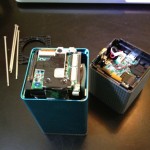 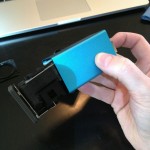 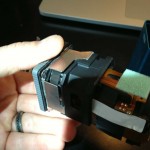 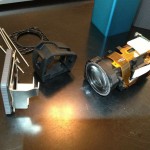 If you have questions, why not join the forum discussion?

Ewolfy is planning on going even further with the disassembly:

Now, this is as far as I’ve gone so far but I am going to eventually take everything apart, every screw, battery, display, etc.. I will document that as well.