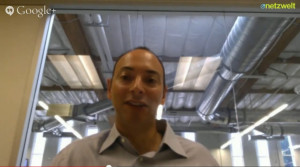 Last week, Lytro CEO Jason Rosenthal gave a video interview to Netzwelt Live on Google Hangouts.
First, Rosenthal talked about his own background, the basics of light field technology and its advantages over conventional optical systems. Then, he answered some questions regarding Lytro’s advance from a gimmick-style proof of concept to a semiprofessional camera system (Lytro Illum), the Illum’s target audience, and some of the camera’s features.

Though the interview is done by German tech magazine Netzwelt, it is held in (slightly bumpy) English, and worth watching since you’ll see and hear a very enthusiastic Jason Rosenthal talk about both the technology and Lytro as a company.

An interesting note for international Lytro fans: Rosenthal confirms in the interview that (1) the Illum will be available in Germany and other international distribution networks on the same day that it’s released in the US, and (2) it will be priced at 1,599 € in Europe.