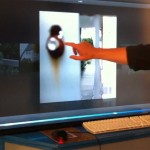 Interacting with a Living Pictures on a small screen just doesn’t do the technology justice: Reviewing the images directly on the camera’s 1.52 inch display gives you an idea of whether the image is refocusable, but the effect is obviously much better on a computer screen. But is a standard 27 inch screen enough?
Lytro-Fan Axel Schuch shows us what it’s like to view and interact with Lytro Living Pictures on a very big touch screen:

Judging from the video, the images still look pretty good on a 55 inch display, and interacting with them on such a big touchscreen must be even more fun!