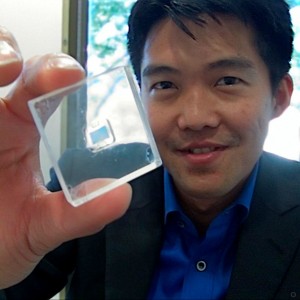 For Lytro’s official sales start in Australia, just a few days ago, Lytro’s founder Ren Ng and his team came to Sydney to talk to the press, distributors and LightField fans.
One notable article that caught our interest comes from the Australian branch of Gizmodo, is a short interview with Ng where he is asked about the possibility of packing LightField technology into smartphone cameras:

People look at Lytro and say ‘well, it’s a big shape, so what about very small packages?’”. He goes on to point out that you don’t actually need to fit the whole thing inside a phone to give it light-field abilities.

“The whole front section of the camera is a zoom lens,” he explains, adding that the actual sensor part is held in the seam between the anodised aluminium and the rubber top of the Lytro camera. He reaches into his bag and pulls out a small glass slide. This is the secret, he says, to making Lytro so special. It’s the light-field sensor.

It’s no bigger than the diminutive nano-SIM you’d expect to find in an iPhone 5 and it’s what you need to make light-field possible. This is the answer to the million-dollar question: putting Lytro into a mobile phone is easier than we could have ever imagined. Sure it still requires research and extensive testing, but the marriage of these technologies isn’t entirely absurd, after all.

“The compactness of the sensors is very, very small, so that means you can put it in a number of different things,” he tells me. Vendors are already queuing up to put it in their devices:

“There’s been tremendous amounts of inbound interest from all industry players in all ecosystems. From components [manufactuers]… all the way to systems with cell phones and stuff like that,” he adds.

We’re still only on the first step of a light-field journey, but a future with light-field smartphones is a future you won’t have to wait long for.

Note: There is one small mistake in the report: What Ren presented was not really a LightField sensor, it’s what turns an ordinary CCD- or CMOS-sensor into a LightField Sensor: a microlens array.