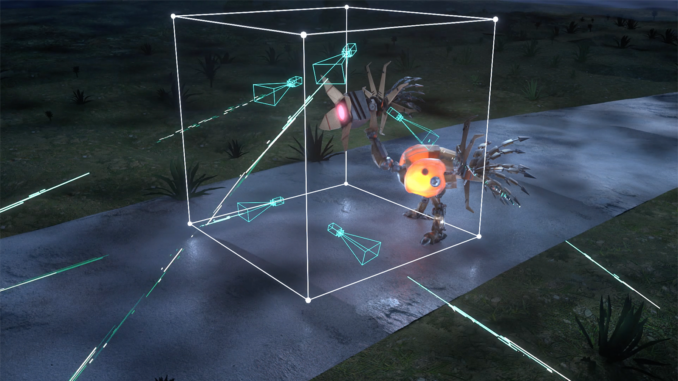 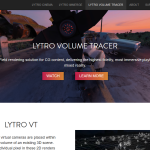 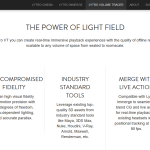 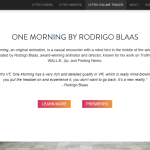 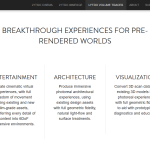 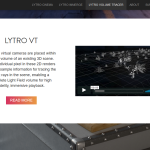 Lytro VT
Multiple virtual cameras are placed within a view volume of an existing 3D scene. Each individual pixel in these 2D renders provide sample information for tracing the light rays in the scene, enabling a complete Light Field volume for high fidelity, immersive playback.

One Morning By Rodrigo Blaas
One Morning, an original animation, is a casual encounter with a robot bird in the middle of the wilderness. It is created by Rodrigo Blaas, award-winning animator and director, known for his work on Trollhunters, WALL-E, Up, and Finding Nemo.

“With Lytro VT, One Morning has a very rich and detailed quality in VR, which is really mind-blowing. Once you put the headset on and experience it, you don’t want to go back. It’s a new reality.”
– Rodrigo Blaas

The Power of Light Field
With Lytro VT you can create real-time immersive playback experiences with the quality of offline rendering, scalable to any volume of space from seated to roomscale.

Merge with Live Action
Compatible with Lytro Immerge to seamlessly blend CG and live action for real-time playback on existing headsets with positional tracking at up to 90 fps.

We’re also including a related Lytro Blog Post from October 2017:

We are thrilled to announce our latest innovation for virtual reality: Lytro Volume TracerTM (Lytro VT), a Light Field solution for pre-rendered CG content that delivers the highest fidelity and most immersive playback experience. To showcase this new solution, we’re premiering the world’s first Light Field animated short, One Morning, created by award-winning director Rodrigo Blaas and El Guiri Productions at On The Lot this week.

The challenge in VR for CG content is that real-time engines work in milliseconds per frame, and high-end cinematic renders can take hours per frame to complete. Lytro VT bridges this gap by enabling almost any render engine to produce Light Field samples of a 3D CG environment, which are then traced into a fully immersive VR experience. The result is an unprecedented combination of stunning visual quality — which matches the quality produced by cinematic 3D render engines — with full 6DoF and view dependent lighting effects, at 90 frames per second, in headset. 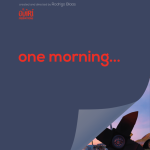 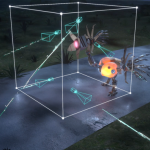 One Morning, was animated on the Nimble Collective, a cloud-based animation platform, rendered in Maxwell, and then brought to life in VR with Lytro VT. One Morning tells the story of a brief encounter with a robot bird in the middle of the wilderness with the rich and detailed quality seen in all of Rodrigo’s amazing work! Find out more about Rodrigo’s award-winning work here: Rodrigo Blaas on IMDB.

For more information about One Morning and the premiere at On The Lot, visit vr.lytro.com.