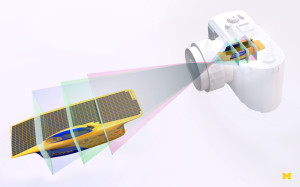 Light field technology that’s currently available, like the Lytro Illum or Raytrix’ industrial light field cameras, is largely based on microlens arrays which allow the flat imaging sensor to infer the direction of light rays in addition to their colour and intensity. While Raytrix has managed to ramp up spatial resolution to 25% of the actual sensor resolution by way of a customised, heterogeneous microlens array, effective resolution is still a limitation of today’s light field cameras.

Now, researchers at the Nanoelectronics and Nanophotonics Lab, University of Michigan, have announced working on a different approach that would allow capturing complete light fields at full sensor resolution. Rather than microlenses in front of a standard imaging sensor, the team around Zhaohui Zhong are developing a new sensor consisting of several transparent light detectors based on graphene, a material consisting of a single layer of carbon atoms. 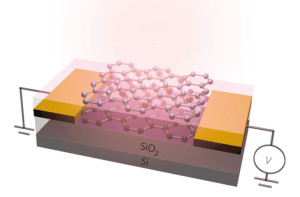 “The microlens approach involves an inherent trade-off between resolution and the ability to refocus or resolve depth,” Norris said. “Our stack approach enables more information to be acquired without losing image resolution.”

“Ordinarily, you want the light detector to absorb as much light as possible for high sensitivity, to produce a clearer picture,” Zhong said. “Graphene detectors can offer very high sensitivity, so you don’t really sacrifice the clarity by making them transparent.”

With the change in recording principle, the researchers say that image reconstruction will be much easier, less resource-intensive, and therefore faster, allowing high-speed high-resolution light field video.

The team is currently working on an SLR-sized camera to incorporate the technology, but says adaptation for smartphone camera modules may also be possible.