Lytro Founder to Join UC Berkeley as Assistant Professor in 2015 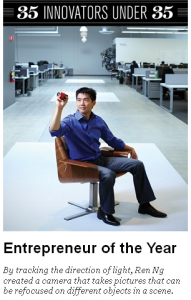 Ren Ng is the name behind a major step towards hand-held light field cameras. After spending 8 years commercializing the product of this PhD thesis for the consumer market, the founder and executive chairman of Lytro has announced he will return to academia in 2015.

Ng will remain a full-time chairman of Lytro through the summer of 2015, when he will commence a position as assistant professor at the University of California in Berkeley’s Department of Electrical Engineering and Computer Science.

He had stepped down as CEO in June 2012, and became executive chairman of the company. His prior position was filled by Jason Rosenthal in March 2013, who expressed confidence in continuing the company’s path without disruption:

“We’ve got a great team in place and the right technical expertise,” Rosenthal said [in an interview]. “We can keep right on doing what we are doing without Ren being a full-time player.”

To learn more about the history of Lytro, be sure to check out our Lytro Timeline.