Lytro is shipping the next batch of cameras

The next shipment has left Lytro, and a bit earlier than expected: At least some cameras which had been estimated to ship in “april/may 2012” are now being shipped, and a new set of shipping confirmation emails has rolled out. 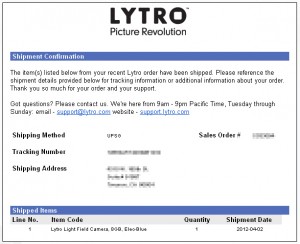 Lytro has apparently caught up with its production: The first shipment was scheduled for “january/february 2012”, and went out on february 29.

Did you order a Lytro camera? Has it shipped yet, or are you still waiting?

If you’re outside the US and would like to get one, check out our post about ordering a lytro camera from abroad!